– Remains of the Temples;
– The area where Julius Caesar was assassinated;

2ALTAR OF THE FATHERLAND

3CHURCH OF SANTA MARIA IN ARACOELI

5VIEW OF THE ROMAN FORUM

Embark on a self guided tour of the Ancient Rome. Starting from Largo di Torre Argentina, the area where Julius Caesar was murdered, reach Piazza Venezia and the impressive Altar of the Fatherland! Climb up the stairs to reach the church of Santa Maria in Aracoeli and Piazza del Campidoglio.
Stun at the ruins of the Roman Forum from Via del Campidoglio and walk down the charming street called Via di San Pietro in Carcere. Head to Via dei Fori Imperiali to discover the ruins of Caesar’s and Trajan’s forum till you reach the Colosseum! Admire the ancient amphitheater from the outside, along with the famous Arch of Constantine. End your self guided tour at Circus Maximus.

Largo di Torre Argentina is the most extended complex from the Roman Republican age. The remains of the four temples date back to the 4th and 2nd century BC. Even though they are not imposing in size, they do have a real interesting architecture and history. Indeed, you are standing in the area where Julius Caesar was killed! The murder occurred on the Ides of March next to the temples in the senator’s meeting place nearby Pompeo’s theater.

Go at the west corner of the square next to the tower, then take via delle Botteghe Oscure and walk until the end of the street.

2. ALTAR OF THE FATHERLAND

The imposing monument, known as Altar of the Fatherland or “il Vittoriano”, was designed by Giuseppe Sacconi (1885-1911) and dedicated to the first Italian King Vittorio Emanuele II.

Admire the two colossal chariots of winged victory made in dark bronze contrasting the white marble structure of the monument. The chariots were carried out in 1908 by Carlo Fontana and Pablo Bartolini.
The actual altar is located at the centre, crowned with a statue of Roma, at the base of which, the Unknown Soldier monument was placed in 1921, in memory of all those lost in the First World War. On the side of the building there are two museums housing temporary exhibits. On the terrace, there is a caffè offering a beautiful panorama.

Leave the Vittoriano. On the left side of the monument you will see a staircase. Climb up climb the steep stairs to visit the Church of Santa Maria in Aracoeli.

The church rises on the highest point of Campidoglio Square, where the “Arce” or citadel of Rome was located that can be reached only by climbing the 124 steps. The stairway was built in 1348 and dedicated to the Madonna, for having saved the city from a plague. Santa Maria in Aracoeli inherited the glory of the Ancient Campidoglio, becoming the national church of the nobility and people of Rome and seat of the medieval Senate. The church is also important for its relics, frescoes and gilded ceiling.

Climb the lower stairs referred to as the Cordonata, to rise the Capitoline Hill and find Piazza del Campidoglio.

Michelangelo designed this splendid square for Pope Paul III (1534-1549). Two palaces, Palazzo dei Conservatori and Palazzo Nuovo, both part of the Capitoline Museums Complex, overlook the charming piazza. Between them there’s Palazzo Senatorio, which houses the municipality of Rome.
Built on the Tabularium, the ancient Roman archives, it is preceded by a stairway with two converging ramps with Roman statues, representing the Nile river, the Minerva and the Tiber river, at the base.
The Equestrian Statue at the centre is dedicated to King Emmanuel II.

Facing the Town Hall take the street on the right to discover an amazing view of the Roman Forum from Via del Campidoglio!

The Roman Forum served as the key point of the civil and economic life in Ancient Rome. This was the place has been considered as the heart of Western civilization!

With the Town Hall in front of you, take the street on the left and go down via di San Pietro in Carcere to find the Acqua Marcia Fountain.

The “Marcia Aqueduct” was built by a praetor, Quintus Marcius Rex, between 144 and 140 b.C. and it was financed with the loot taken from Carthage and Corinth after 146 BC. The Marcia was appreciated by the Romans for the quality of its clear, cold water, which came from rainwater running down the slopes of the Simbruini ridge. The water is potable and you can drink it!

The long, straight road built in 1932 cuts the Forum ruins in half. On your right stands the Forum of Caesar: consecrated in 46 b.C, and completed during the reign of Augustus after the victories and triumphs of the Gallic wars, it was the first of the so-called Imperial Fora. The Forum of Caesar has rectangular shape and is bordered on all four sides by porticoes. Marvel at the remains, three beautiful columns, of the Temple of Venus Genetrix, dedicated to goddess of motherhood and domesticity.

On the opposite side of Via dei Fori Imperiali stands the Trajan Forum, intentionally commissioned larger and more splendid than the others, with a huge market area inside that served as a new business center for Rome.
Right after Trajan’s Market there’s the Forum of Augustus which still retains three, 45 feet-high Corinthian columns from the grandiose Temple of Mars Ultor (Mars the Avenger).

The huge amphitheatre was started in 72 a.D. by Vespasian and finished by his son Titus in the 80 AD. Domitian added some finishing touches in 81.The actual name of the Colosseum is “Flavian Amphitheatre” after the Flavian dynasty, but is commonly referred to as the Coliseum or Colosseum because of the colossal statue of Emperor Nero that once raised nearby. In its heyday, the massive amphitheatre served as a location for state functions. However, the events the Romans preferred the most were the circus games (ludi circenses), which primarily consisted in ferocious animal hunts, gladiator battles and even mock naval battles.

With the Arch of Constantine behind you, take via di San Gregorio. At the end of the street take a left turn and reach Circo Massimo.

Circus Maximus was basically a mass entertainment venue in Rome, an ancient stadium built especially for chariot races and public games connected to Roman religious festivals. Circus Maximus, the first and largest stadium in ancient Rome, became a model for next circuses. Today, Romans still use it for jogging and walking! 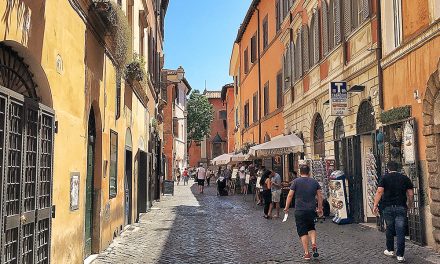