Together, both the Basilica Julia and the Basilica Aemilia in the Roman Forum in Rome, Italy, represented the palaces of justice of the Ancient Rome. Today, there are just a few ruins of these imposing public buildings, which one should imagine as a covered area of the Roman Forum. 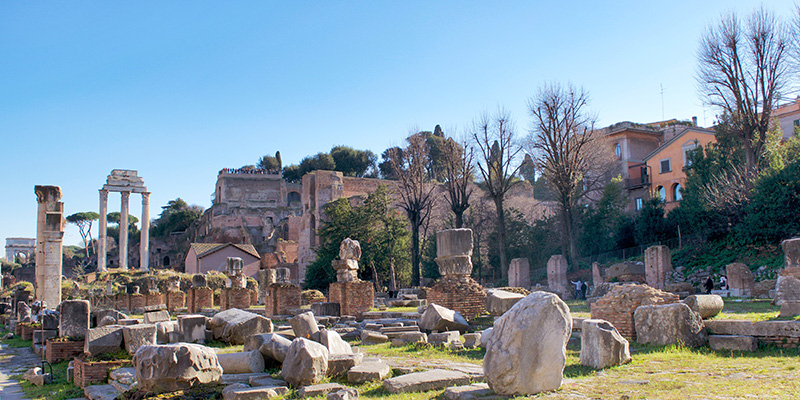 When was the basilica Julia built?

The great Basilica Julia was started by Caesar in 46 B.C and ended by Augustus in 12 A.D. Again, after a great fire the Basilica was reconstructed under emperor Diocletian in 283 A.D. Originally, the Basilica was built on site of the earlier Basilica Sempronia, standing on the opposite side of the Basilica Aemilia between the Temple of Saturn and the Temple of Castor and Pollux.

The Basilica Julia was actually erected on a slight slope at bottom of the Capitoline Hill. This is easy to understand from the stairs, which are the most important remains of this building still surviving the test of time.

Overall, the Basilica measured 101 x 49 meters and had five naves. It featured a wide central room surrounded by pillars, graced with columns and arches. Everything was decorated with the finest marbles. The central nave overlooking the square developed upwards on two floors. Thanks to this “open-air” structure the rooms must have been all well illuminated.
The stairs on the Via Sacra led to a porticus, supported by columns. The facade, which was entirely in marble, completely disappeared. The only remain standing is a pillar in travertine marble, which was recently reconstructed.

1Looking up close at the stairs and the pavement of the portico you can see some board games set in stone. These were called “tavole lusoriae” and were used by ancient romans to kill time.

2The Basilica Julia primary function was to house the civil law court. However, you can imagine this building as a mall, with shops and other offices crowded with people, flanked by luxury houses. In time, the Basilica Julia actually became one of the most favorite meeting place for ancient Romans.

3Ancient Romans used to gather at the Basilica Julia also to attend public trial. They usually occupied the upper floors of the central nave.