After 30 year of renovations the Golden House, buried underground the Oppio Hill not far from the Colosseum, reopened to public.
Every Saturday and Sunday until December 31st 2017, visitors will have the chance to join a guided tour of the Domus Aurea in Rome. Visits are enhanced by a new and innovative multimedia experience that, with the introduction of augmented reality technology and devices, increasingly improves the scientific value of the site and visitor’s appreciation of this historical place. 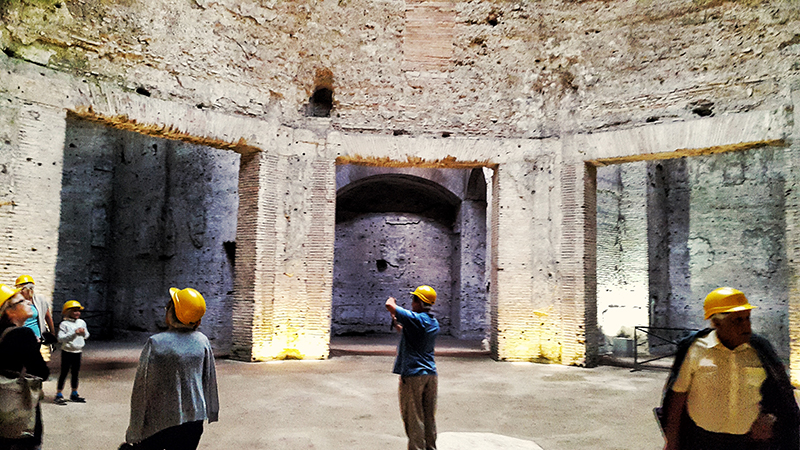 The Domus Aurea, known also as Nero’s Golden House, was built after the big fire swept through Rome in 64 A.D., destroying much of the downtown area. Wether or not Nero was the one who started the fire, we can certainly state that he took advantage of the situation. The land was used to build his personal grand palace, which extended for over 80 hectares (nearly 198 acres) with courtyard, dining rooms, fountains, pools, gardens and even a lake. All complete with the finest decorations and precious materials.
After Nero’s death the land was given back to the people of Rome. Over the centuries the palace was dismantled of all its treasures until it was forgotten, buried underground and covered in dust and sand.
It was only in 1480 that the remains of the palace were discovered again. At the very beginning of excavation works no one really understood that the chambers buried under the Oppio Hill were part of un underground royal palace.

Ironically, it is only thanks to the dust and sand that today we can still admire and appreciate the frescoes and painting adorning the Domus Area, which protected it from its most dangerous enemy: humidity!
Renaissance painters such as Il Pinturicchio, Il Ghirlandaio and even Raphael draw great inspiration from the paintings found in the Domus Aurea, depicting fable animals and legendary figures.

Today, the visit takes place mostly in the area of the octagon hall, the center of Nero’s palace and of court life at the Emperor’s times. The hall is topped by a cupola, a dome with an oculus – similar to the Pantheon – creating very suggestive patterns of light and shadows.