The Fountain in Piazza Santa Maria in Trastevere is located right in front of the Church of Santa Maria in Trastevere, a monumental work by Donato Bramante, Bernini and Carlo Fontana. If you are walking through the narrow streets of what is probably Rome’s most typical district, you cannot fail to notice the Church and the Fountain overlooking the main square! Probably the best time to visit the fountain is in the evening or at night time, when the square is crowded by people attracted by the many restaurants and shops open until late. It is common for locals to sit on the stairs of the fountain and listen to musicians and performers playing their music. 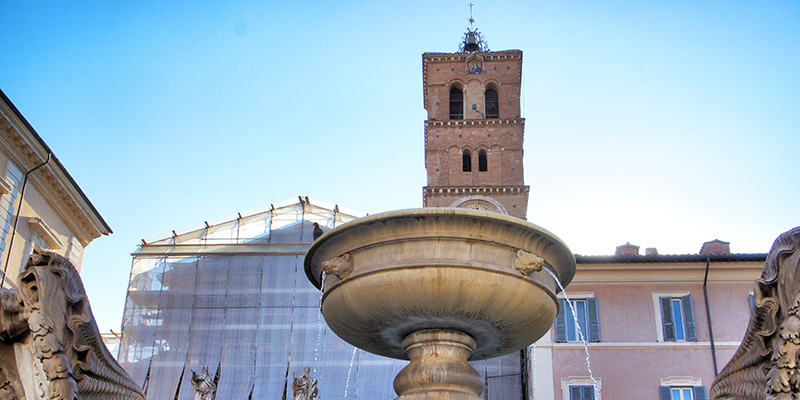 The mysterious origins of the fountain

With regard to the Fountain in Piazza Maria in Trastevere, an aura of mystery and legend still lingers around its origins. Indeed, according to tradition, this is the oldest fountain in Rome dating back to the 8th century, but the exact date of its construction is still unknown. The Fountain in Piazza Santa Maria in Trastevere was also featured in a city map dating back to 1471, designed by Pietro del Massaio. In his original drawing, the fountain featured two basins, one above the other, pouring water into the basin below. 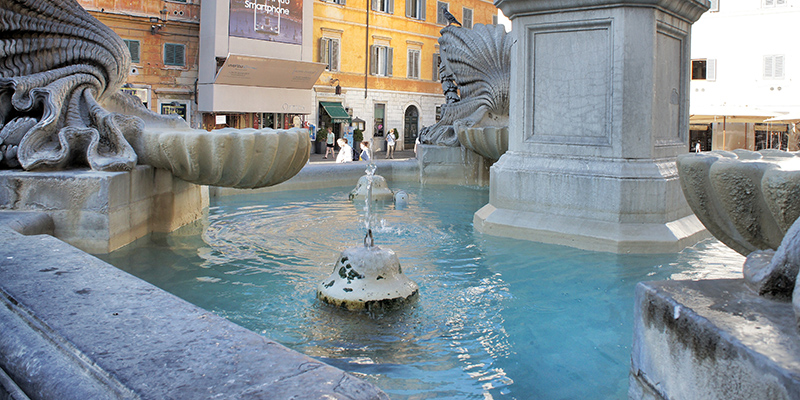 According to legend, on the night of the birth of Christ a fountain of oil miraculously appeared from the ground right on the spot where today stands the Church of Santa Maria in Trastevere, hence it was given the name of “Santa Maria in Fontibus”.

Apparently, following these mysterious events, early Christians, whose number was slowly growing in Rome, asked the Roman Emperor Alexander Severus (3rd century A.D) to build on this site the Taberna Meritoria, a sort of retirement house for veterans. The Taberna was built on the spot where today raises the Church of Santa Maria in Trastevere, which is considered to be the first Church ever built in Rome.
For those who believe in this legendary version, the main altar in the Church of Santa Maria in Trastevere shows the old inscription “Fons Olei” recalling the event.

However, other sources presented a less legendary version of the origin of the Fountain.
According to this second theory, the first Roman Emperor Octavian Augustus, who lived between 27 B.C and 14 A.D, used to enjoy naval battles, called naumachiae, for which actual ships were used. Naval battles usually took place in arenas or squares, which were flooded by water and were a very popular form of entertainment in Ancient Rome. Therefore, Augustus had an aqueduct built to bring non-drinkable water to Trastevere battlefields. 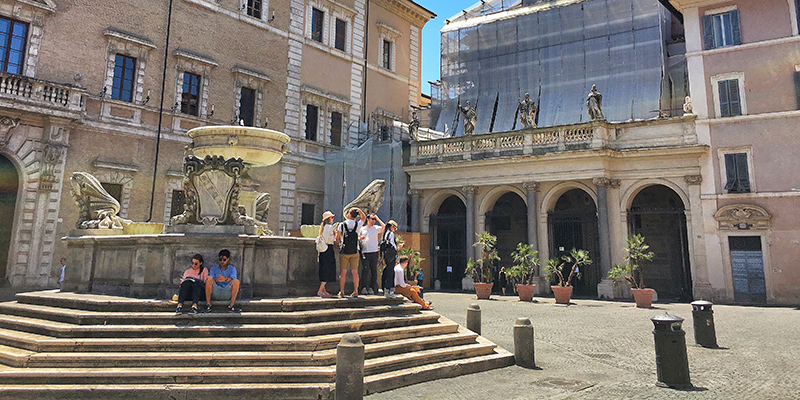 Besides its mysterious origins, the Fountain in Piazza Santa Maria in Trastevere is a real interesting monument in Rome. The octagonal fountain which can be admired today right in the center of the square was built following the design by Donato Bramante, the architect of St. Peter’s Basilica. In 1659 the fountain was connected to the Acqua Paola Aqueduct and remodeled by Bernini who moved the fountain to the center of the square and added four double shells turned outwards in the pond. Later, these were replaced by Carlo Fontana with his own sculpted seashells, which are larger and turned inwards. 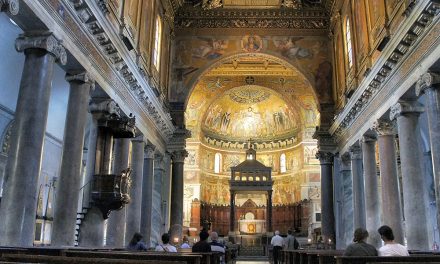