7THE GREAT SYNAGOGUE OF ROME

Discover the neighbourhood of Trastevere in Rome by following a free walking tour designed by official, local tour guides!
Enjoy a pleasant stroll through the picturesque, cobblestone alleys of one of the most charming areas in Rome at a leisurely pace. Discover masterpieces of art, fountains, squares, churches and spots where locals usually go.

This free walking tour to discover the district of Trastevere in Rome starts in Piazza Trilussa.
The square is named after the great Roman poet Carlo Alberto Salustri, better known with the nickname “Trilussa”, born in Rome in 1871 and died in 1950. On the left side of the square there’s a small garden with a commemorative monument, a marble statue of the poet reciting a poem.

Maybe these animals won’t understand me,
but at least I feel satisfied
for being able to say how things are for real
without the fear of landing in jail.”

With the fountain in front of you take the street on your left called Vicolo del Moro. At the end of the street, turn right and stop at the stunning “Piazza di Santa Maria in Trastevere”.

The Basilica of Santa Maria in Trastevere overlooks the homonymous square, the beating heart of this neighbourhood in Rome.
Dating back to 337, this is the oldest Basilica in Rome. Beside the facade stands a lovely Romanic bell tower from the 12th century. The interior of the apse is decorated with a mosaic dating back to 1143. Inside, the Church of Santa Maria in Trastevere features impressive mosaics by Pietro Cavallini.

In the middle of the square rises a beautiful fountain, work of Donato Bramante, Bernini and Carlo Fontana which has always been regarded as quite interesting due to its mysterious origins. Indeed, according to tradition, this is the oldest fountain in Rome dating back to the 8th century, but the exact date of its construction is still unknown. According to legend, on the night of the birth of Christ a fountain of oil miraculously appeared from the ground right on the spot where today stands the Church of Santa Maria in Trastevere, hence it was given the name of “Santa Maria in Fontibus”.

At sunset the Fountain of Santa Maria in Trastevere is particularly lovely.

Sit down and rest for a while on the steps as locals do. Listen to the sound of the bells ringing as the bars in the square fill up for aperitif hour.

Leave the square and the Church behind, and walk ahead down Via della Lungaretta.

Dive into the night life of the Eternal City! Via della Lungaretta in Trastevere will set your senses alive with its cafes, restaurants, gelato shops, cocktail bars, which all stay open until late in the evening!

Cross the big avenue called “Viale Trastevere” and continue along Via della Lungaretta until you find on your right a little street known as “Vicolo della Luce”. Walking down this cobblestone, picturesque alley you will encounter another street “Via dei Genovesi”.

At your right stands a big brown building that houses a famous chef school! Keep walking for about 5 minutes until you cross “Vicolo dell’Atleta”. You will find it on your right.

This narrow street is named after a famous statue depicting an Athlete, found in this exact spot by chance in the 19th century. Today the statue is housed inside the Vatican Museums.

At the end of the street, on the right side stands a building, which according to several sources could have been one of the oldest Synagogues in Rome. The site is no longer used for ritual functions, and houses today several apartments and a fine restaurant.

At the end of the street, turn left and then take the first street on your right called “via Santa Cecilia”.

5. CHURCH OF SANTA CECILIA IN TRASTEVERE

The Church of St. Cecilia in Trastevere dates back to the 5th century and is especially interesting for its history which links the church to the martyr’s life. According to tradition, the church rises on the remains of Cecilia’s house.

Legend seems to have roots in history though. Indeed digging activities under the church have brought to light a group of ancient buildings and houses dating back to the Roman times when St. Cecilia lived.

Enter the church and don’t miss the sculpture located in front of the altar by Stefano Maderno, depicting St. Cecilia in the same position she was found in her tomb. Looking at the statue up-close and personal you will see that the position of the fingers of the right hand symbolize the Holy Trinity.

Exit the Church, take via Santa Cecilia once again! Walk toward the river and reach the Tiberina Island.

Two bridges join the Isola Tiberina or Tiberina Island to the mainland: the Cestio bridge (46 b.C.) and Ponte Fabricius, also known as Quattro Capi, because of the four headed statue at the bridge entrance on the side of the Jewish Ghetto built in 62 B.C.

At Springtime and Summertime, you may see locals sunbathing here in the afternoon, while in the evening and the little square close to the river bank is usually crowded by people heading to restaurants and cocktail bars.
The Church of Saint Bartholomew stands on the ruins of the ancient Temple of Aesculapius, the Greek god of medicine, once a pilgrimage site for the diseased.

7. THE ROMAN JEWISH GHETTO & THE GREAT SYNAGOGUE OF ROME

Cross the small bridge and reach the Jewish Ghetto of Rome. Across the river you can clearly spot among the trees the beautiful facade of the Great Synagogue of Rome.

Inaugurated in 1904, today the Synagogue is home to the Jewish Museum in Rome, which houses an impressive collection of artwork and documents, all evidence of the historic importance of the Jewish community in the city of Rome, as well as the fascinating history of Roman Judaism.

Taken all together, the surrounding streets form what was known as the historical “ghetto” – which was established in the middle of the 1500’s until the 19th century – the area where all Roman Jews were forced to live.

We strongly suggest you to taste some of the Roman Jewish snacks at the patisserie shop in front of the school on via del Portico d’Ottavia. Don’t miss lip-liking hot biscotti and chocolate-ricotta tart.

Behind the area, in via del Portico d’Ottavia, rises the homonymous porticus dedicated to Emperor Augustus’s sister, Octavia, in I century a.D.

Inaugurated by Augustus around the 17 b.C., Marecellus Theatre – also known as Teatro di Marcello – was dedicated to the memory of his nephew. The original building reached 33 meters in height and could accommodate up to 15,000 spectators. Teatro Marcello was one of the biggest theatres in ancient Rome.
Later in years, the building was used as a quarry to extract precious materials, folling the same destiny of other monuments in Rome.

Before leaving the site, look at the remains of the Temple of Apollo Sosiano. There are three beautiful columns standing. Other remains of this ancient temple can be admired today at the Centrale Montemartini Museum. 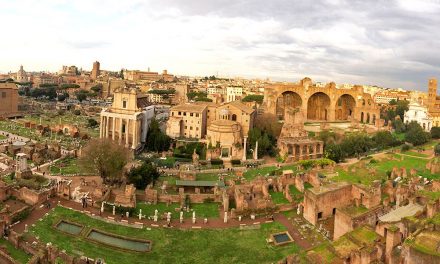