Getting Around Rome by Public Transport

Rome public transport system includes buses, trams, metro and local trains. In this page we are covering information about each transport, where to buy tickets and how to use them.

Rome has two metro lines that will allow you to reach the main attractions in the city.
Generally speaking Rome underground service works pretty fine. Trains are usually punctual and waiting time between rides is 5 minutes on average.
The cons are that Rome metro service doesn’t cover several important areas in Rome and that the metro stations close too soon in the evening. See below information about opening hours.

The A Line is characterized by the red /orange color and reaches several landmarks in Rome such as the Vatican Museums, Piazza del Popolo, the Spanish Steps, Trevi Fountain and so on…
The B Line, or Blue Line, covers areas such as the Colosseum, Circus Maximus and also Termini train station.
Eventually there’s the C Line (green), which is still under construction.

All throughout Rome, Metro stations can be identified by the red signal with the white “M”. 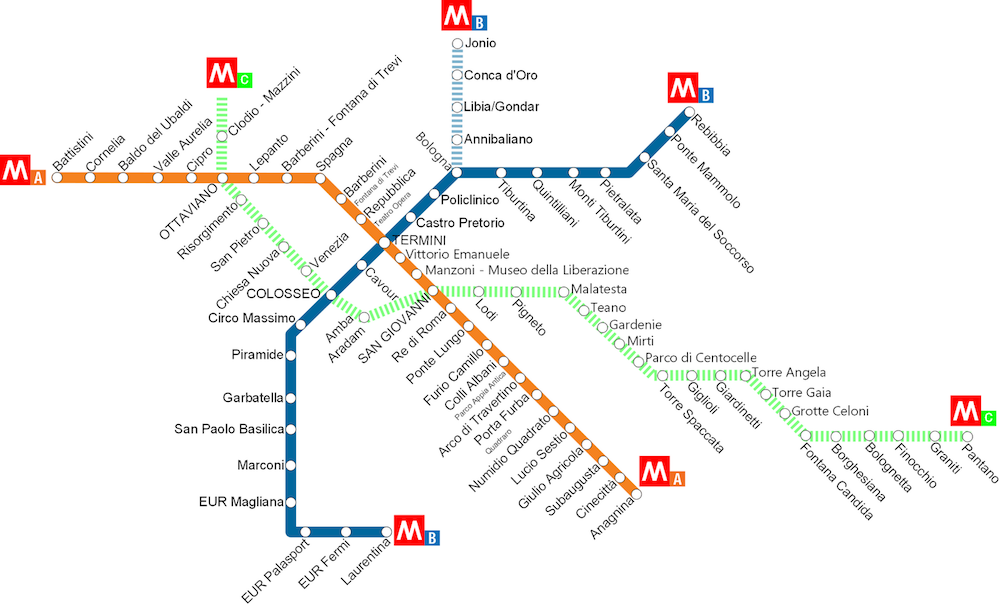 Contrary to the metro service, traveling by bus in Rome can be a really stressful experience.
As locals sometimes we rather walk long distances than taking buses, which are always late. This also explains why there are so many cars and motorcycles in Rome.
Some bus rides work better than the others, but the average waiting time at a bus stop is from 20 to 40 minutes, unless you are really really lucky! The result is that buses are always crowded with people.

Our advice is: travel by metro or by tram as close as possible to your destination and then just walk!

The Bus Stations in Rome can be recognized from the typical yellow board which shows for each bus number all the stops and final destination.

Even though the tram service in Rome doesn’t reach several highlights in the city as the metro, it works pretty fine, being usually very punctual and a less crowded option.
For instance, trams in Rome can bring you from the Vatican Area to the Borghese Museums and Gardens during a very nice trip that will also allow you to sightsee the city.
Trams in Rome are green, with a European-style!

Tickets for Metro, Bus and Trams

The standard, regular ticket in Rome is called BIT.
Price: 1,50€
Expiration: it expires after 100 minutes from the first validation.
The BIT ticket can be used for only 1 Metro ride (on multiple trains, without exit the metro turnstiles), or on multiples buses and trams for 100 minutes.

The ROMA 24H ticket is valid for 24 hours from the first validation for an unlimited number of rides on metro, buses or trams within Rome. It costs 7,00€. This must be validated only the first time you use it.

ROMA 48H ticket is valid for 48 hours from the first validation for an unlimited number of rides on metro, buses or trams within Rome. It costs 12,00€. It requires first time validation only.

ROMA 72H ticket is valid for 48 hours from the first validation for an unlimited number of rides on metro, buses or trams within Rome. It costs 18,00€. It requires first time validation only.

CIS ticket is a 7-day ticket. Price is 24,00€ and it’s valid for 1 week from the first day of validation with an unlimited number of rides on metro, buses or trams within Rome. It requires first time validation only.

Where to buy tickets

First thing to say is that differently from other cities in Europe, in Rome tickets cannot be purchased on bus or tram. You must buy ticket BEFORE getting on public transports.

So it is important you know where to buy them.

Tickets for Rome public transports can be purchased:
– at every Metro Station at the ticket office or at automated machines;
– “Tabacchi” or “Tabaccherie”: they are all around the city, characterized by blue sign with a big, white T;
– Bars licensed to sell cigarettes featuring the “Tabacchi” sign;
– Newspaper stands.

How to use and validate tickets

Once you’ve purchased your ticket, you must validate it. Riding without a validated ticket can result in a fine of €50 on the spot, plus the cost of the ticket.
If you are taking the metro it’s really easy. The ticket must be validated at the turnstiles or you won’t get in.
Same thing is true for buses and trams. Once onboard look immediately for the validating machine and insert the ticket in the direction of the arrow.

In case the machine is not working, ask the driver for help.

When the tickets is validated you will notice that the machine has printed the date and the hour of validation. Hence, you will know when the ticket expires.

It’s important you always carry the ticket with you, in case you have to show it during regular checks to the ATAC personnel.

Crossing the Street in Rome

Is Rome Safe For Tourists?

Taxis in Rome: Things to Know