In the Middle Ages the Church of Santa Maria in Aracoeli became the main center of the political and religious life of Ancient Rome. Here, the popular leader Cola di Rienzo, tribune of the Roman people, gave public speeches, and also met his death. Several executions were performed at the foot of the church steps. In his well-known work “History of the Money”, the anthropologist Jack Weatherford explains how the church was previously conceived as an incarnation of the Temple of Juno Moneta, the ancient Roman temple that stood on the main summit of the Capitoline Hill, overlooking the Roman Forum.

Although the temple was founded only in 343 B.C., the cult of Juno Moneta dates back to even an earlier stage of Roman history. The goodness was regarded as the protectress of the city’s funds. However, the attribute “Moneta” comes from the Latin verb “monere”, which means “to warn”.

Legend has it that one night the Gauls tried to enter the citadel, planning their attack against the Romans. Some geese around the temple started honking, warning the Romans against the imminent threat.

Thereinafter, the goddess Juno acquired the name “Moneta”. Centuries later, near the same area was found the Rome’s Mint, which was referred to as “Moneta”, the same term we still use today in Italy for “coin”.

The Shrine of Saint Helen

The Romanesque-Gothic Church of Santa Maria in Ara Coeli is also known for housing the shrine containing the relics of Saint Helen, mother of Emperor Constantine, and for a wooden sculpture of “Saint Jesus” that was baptized in the Jordan river.

Since the 16th Century, people think that the sculpture has miraculous powers, such as raising the dead and healing from sicknesses.

During the 17th century farmers used to come into the citadel and sell their products near the staircase of the church. One night some wooden barrels fell from the stairs, running over the farmers. To avoid future accidents, the staircase was closed with two gates until the end of the 19th century. People started regarding the staircase as sacred.

Women looking for a marriage or to have a child, or men wishing to won the lottery used to climb the steps of the church on their knees for good luck. 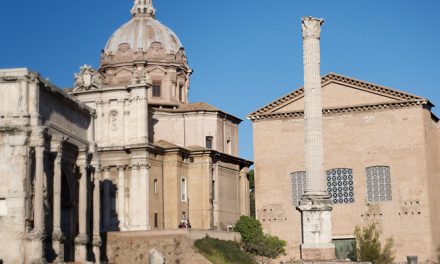