Taxis in Rome: How they Work & Things to Know

Taking a taxi in Rome may not be as easy as one may think. Many complains about rip-offs from non-official taxis or the difficulties encountered in trying to stop one in the street. There’s no need to worry though, because in this article we are going to arm you with some useful tips, so you will learn everything there is to know about taxis in Rome to avoid frauds and wasting your time.

To start off with the right foot in the Eternal City the first thing you should learn is to recognize an official taxi. Those licensed by Rome City Council are white, bearing a black and white “TAXI” sign on the roof. The taxi licence number is written on the the vehicle’s front doors and inside the back left side. 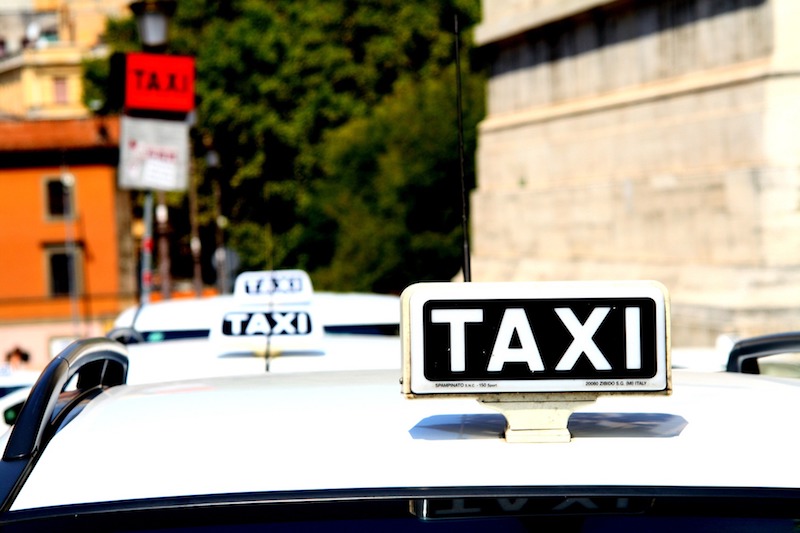 Taking a taxi from the airports of Fiumicino and Ciampino to reach Rome city center may not be the cheapest solution, but it is the most appealing for sure if you are traveling with little kids and have several luggages.
At the airport arrivals avoid anyone approaching you saying “Taxi, taxi!”. They many not be licensed drivers. Look around for the “Taxi Sign” pointing you to the official taxi station, where you will probably see other people in line waiting for their turn to take a cab.

There’s a fixed fare established by Rome City Council that allow you to reach all the destinations within the Aurelian Walls (this includes destinations near the Colosseum, the Vatican Museums, the Spanish Steps, Termini Station, Pantheon, Campo de Fiori and so on) from Fiumicino Airport for 48€ and from Ciampino Airport for 30€.

Tell the taxi driver before departing you want to take advantage of the fixed fee, otherwise he will start running the taxi meter and you will pay accordingly.

Quick tip: if you want to pay with credit car asked the taxi driver before taking the cab.

You can access the Resolution and the price at this link in Italian, English and Spanish
http://www.comune.roma.it/PCR/resources/cms/documents/tariffario_taxi_luglio_2012.pdf

How to call and find a taxi in Rome

Now that you’ve learned to recognize an official taxi and have safely reached the city center of Rome, it’s time to talk about taking a taxi within Rome. This can come to hand if you are really tired strolling Rome’s streets, or if there’s a public transports strike, or need to reach a destination far from the city center.

Don’t try hailing at taxis in Rome, you will fail. In most of the cases taxi drivers won’t stop and if they do you risk rip-offs.

If you are leaving from your hotel or a restaurant ask the concierge or the staff to call a cab for you.

The situation gets a little bit complicated if you are walking in Rome streets on your own or departing from your rental apartment.

In this case you have two options:

If you in the street and want to go wherever by taxi, the most smart thing to do to avoid the extra charge of calling a taxi by phone is to reach the closest taxi stand.

But where are they?

Well, taxi stands are all over the city and they are signalled by an orange “Taxi” sign. A very important rule you should always remember is that there’s a taxi stand in front of all the most important attractions in Rome. Hence, even if you are strolling through little alleys of Rome city center, reach the closest attraction and there you will find an official taxi stand.

This is a short list to help you find the closest taxi stands to Rome’s main attractions:

How much does a taxi cost in Rome?

Across the entire municipal district the cost of the taxi in Rome depends on a progressive taximeter fare based on both the time spent in the vehicle and the kilometres travelled. In addition, there’s an initial fee that changes depending on the day of the week and time.

SPECIAL FARES
A discount of 10% is applicable to the amount stated on the taximeter in the following cases:
• direct journeys to state hospitals in Rome
• for unaccompanied women using the night service (between 22.00 – 6.00)
• for young people coming out of clubs and discos on Friday and Saturday nights, provided that suitable agreements are in place with the management of such venues

Beware, that while is common to accept Visa and Mastercard, many companies offering services in Rome do not accept Amex. Same applies for taxis.

Tipping in Rome and in Italy in general is never mandatory. However it is largely appreciated. So it is totally up to you if you want to leave a tip.

Crossing the Street in Rome

Getting Around by Public Transport

Is Rome Safe For Tourists?