Built on the ruins on earlier Roman Temple, Villa D’Este in Tivoli is a magnificent palace. The ruins of the temple can still be seen through glass floor panels in the rooms of the Villa.
Villa D’Este in named after Cardinal Ippolito II d’Este (1509-1572), governor of Tivoli and of course owner of this stunning architectural masterpiece built in Renaissance style.

Besides the palace itself, the most spectacular thing about Villa D’Este are for sure the extensive gardens beyond, the main highlight of every trip to Tivoli!

Indeed, drawing inspiration from the nearby Hadrian’s Villa, Villa D’Este features terrific gardens and fountains, constructed using the most sophisticated techniques of hydraulic engineering that had an enormous influence on European landscape design.

No doubt about the fact that Villa D’Este and Tivoli Gardens will offer an awe-inspiring experience to everyone looking for the perfect day trips from Rome!

In this page you will find useful information to visit Villa D’Este and Tivoli Gardens, including opening hours, tickets and how to get there. Keep reading for some historical information and don’t be shy! If you have any question post it on our Q&A section, we’d love to hear from you!

– Add this landmark to your Travel List! Tickets can be bought on site!

Hydraulic Organ:
The hydraulic organ of the Organ Fountain is active daily, from 10.30 am, every two hours.
The Owl fountain is temporarily out of order.

Full ticket: € 8,00
Reduced ticket: € 4,00 (EU citizens between 18 and 25 years, upon presentation of an identity document)
These fares may vary in conjunction with exhibitions set inside the Villa.

FREE ENTRY(through presentation of a document stating one of the following conditions):
– to the citizens up to 17 years;
– to disabled people;

Entrance is free for everyone the first Sunday of every month.

Wheelchair Accessibility Service:
The villa is equipped with elevators and electrical vehicles to provide access to the gardens and fountains. A reservation is required at 0774 335850. The service is free.

During the first Sunday of month, because of the large number of person, the service is suspended for security reasons.

How to Reach Villa D’Este and Tivoli Gardens from Rome

1FROM THE CITY CENTER TO COLOSSEUM

From Rome take the B or Blue Metro line and stop at “Ponte Mammolo”. From there you can take the CoTral, local buses that connect Rome to other cities in the Latium region. Take the CoTral bus “Roma-Tivoli” direction. This bus will stop at “Largo Nazioni Unite” in Tivoli close to Villa D’Este.

Son of Lucrezia Borgia, Cardinal Ippolito D’Este commissioned the construction of the Villa to architect Pirro Ligorio in 1550. Disappointed for not being elected Pope, the Cardinal had the villa built to glorify himself, emulating Emperor Hadrian’s Villa in Tivoli. Notwithstanding the reasons behind the origin, Villa D’Este is as a matter of fact a unique masterpiece of art and architecture, especially for the gardens, regarded as the first true example of Italian-style gardens, and due to the scenographic beauty of the fountains.
Yet, the fact that Villa d’Este is today a UNESCO World Heritage Site doesn’t’ surprise at all!

The sumptuous palace comprises several apartments decorated with beautiful frescoes. The lower floor stands right under the Cardinal’s apartments and shows a series of halls decorated following a specific theme and narrative.
The ground floor features a Salon, one of the private rooms of the Cardinal, used for banquets and parties.
Outside, an imposing, beautiful staircase leads inside the palace. This was the main entrance to the palace: guests arrived from the gardens. Today the villa is entered from a doorway on Piazza Trento, next to the Church of Santa Maria Maggiore.

Tivoli Gardens of Villa D’Este develops among terraces, hills, cascades, grottoes and fountains with spectacular water effects.
The Great Lodge or Grand Loggia in Italian was an open-air dining room. A large terrace, 200 meters in length, called the Vialone, lies between the Villa and the gardens, with a panoramic view of the gardens and countryside beyond.
The gardens count more than 30,000 plants that grow in rotation cycle, 150 secular tall-plants, 15,000 perennials, trees and shrubs, other than rare species. The new trees, planted after the construction of the gardens, certainly changed their earlier aspect. Recently many other flowers and plants have been introduced. For instance, you can see several roses.

The fame and glory of the Villa d’Este was above all established by its extraordinary system of fountains; 51 fountains and nymphaea, 250 gushes, 60 pools of water, 255 waterfalls and 100 tanks! And, if you are not already impressed enough by these numbers, just know that in the Gardens of Tivoli the fountains also play music.
Indeed, Villa d’Este has the one and only functioning water organ in the world. The Fountain of the Organ is characterized by an extraordinary mechanism: the flowing water moves the air blowing through the reeds of a large organ, producing delicious melodies. The same happens with the Fountain of Owls, that is temporary out of order. The Fountain of Organ plays daily, from 10.30 am, every two hours.

Other Things to do Outside Rome 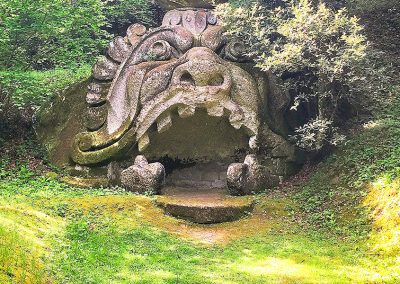 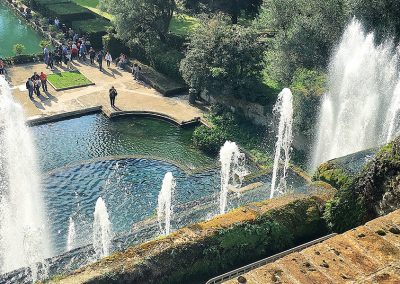 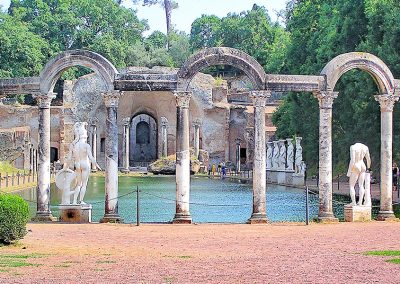 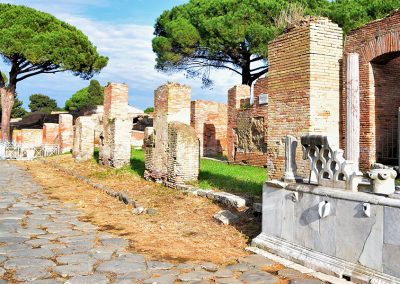